The radio tax or Rundfunkgebühr in Germany is a fee that every person must pay for each household. It is a fee that radio stations charge for the right to broadcast. As you prepare to move into your new home, remember that there is this hidden cost (Radio fee) associated with it. In this guide, we have mentioned every thing you need to know about it and also what happens if you don’t pay it.

The Contribution Service is a public law institution without legal capacity under the auspices of the federal states’ public broadcasting stations (ARD), Second German Television (ZDF) and Deutschlandradio for the purpose of collecting broadcast contributions in accordance with the Interstate Broadcasting Contribution Treaty.

How did the first German Radio Tax work

The first radio tax was enforced in 1927, though this one did not go as planned. A few years later the government tried again to enforce a charge for using broadcasts from the airwaves. In 1935, once more they failed to collect money from all those listening on their receivers.

Still, the idea of collecting money from those receiving broadcast signals remained until after World War II. After WWII, Germany had been split into East and West Berlin due to an agreement between Russia and America. It became apparent that there needed to be some sort of funding for the German Broadcasting Corporation (Deutsche Welle).

A new law was created and enforced in 1953. This time, they made sure that every single person who owned a receiver had paid their tax. The 1953 Radio Tax Law states: “Every household or undertaking with at least one radio receiver is obliged to pay an annually determined radio reception fee”.

This law has been changed many times due to advancements in technology. The most recent change was made in 2013 when the old set-up of taxes (fee per private individual or company) was turned into taxes based on the actual amount of broadcasted frequencies used.

What happens, If somebody is already paying the Rundfunkbeitrag in the Shared Apartment?

If you live in a shared apartment which is WG in German, there’s a good chance that someone else in your new household is already paying the radio tax. To avoid paying twice, please fill out this internet form and notify them of which flatmate is currently paying the radio tax. You’ll also need your flatmate’s name and Beitragsnummer

Why is the Radio Tax Important in Germany?

The Beitragservice, which is in charge of public broadcasters ARD, ZDF, and Deutschlandradio (Germany’s Rundfunkbeitrag is a “legally required contribution for citizens, firms, and organizations” to finance the news and entertainment programming produced by public broadcasters “regardless of their actual media use”), says that

The government claims that by requiring everyone to pay. They can guarantee that a broad range of high-quality programs is accessible on television, radio, and online without the need for commercial networks or advertising.

Similar contribution services exist in other countries, such as the TV license fee in the UK or the Swiss license fee.

In a 2018 court decision, the Federal Constitutional Court defined the term as

“A fee levied on all persons who use radio and television for private purposes at home”.

It’s been that way since. The Rundfunkbeitrag is not a tax, according to the court, even though it appears to be one.

What’s the difference between Radio Tax and TV Tax?

The term “TV tax” is sometimes used interchangeably with the phrase “television license fee”. The TV license is a fixed yearly charge. A TV tax is a similar amount paid to the government in order to watch television.

Please note that the term “TV tax” is sometimes used in Germany to describe the Rundfunkbeitrag. Keep that in mind, it is not an official tax.

How much does the Radio Tax in Germany cost?

In August 2021, Rundfunkbeitrag started charging a monthly tax of 18.36 euros per household, regardless of the number of people in the household. It’s collected quarterly, for a total of 55.08 euros per quarter. This means you pay 220.32 euro per year. Keep this amount in mind when you are renting a place. Usually this cost is not included in your rent.

How to Pay Radio Tax in Germany

Once you have determined how much you owe in radio taxes, it is time to pay. There are a few different ways that you can go about doing this.

You can also choose to pay in advance for half a year or an entire year. 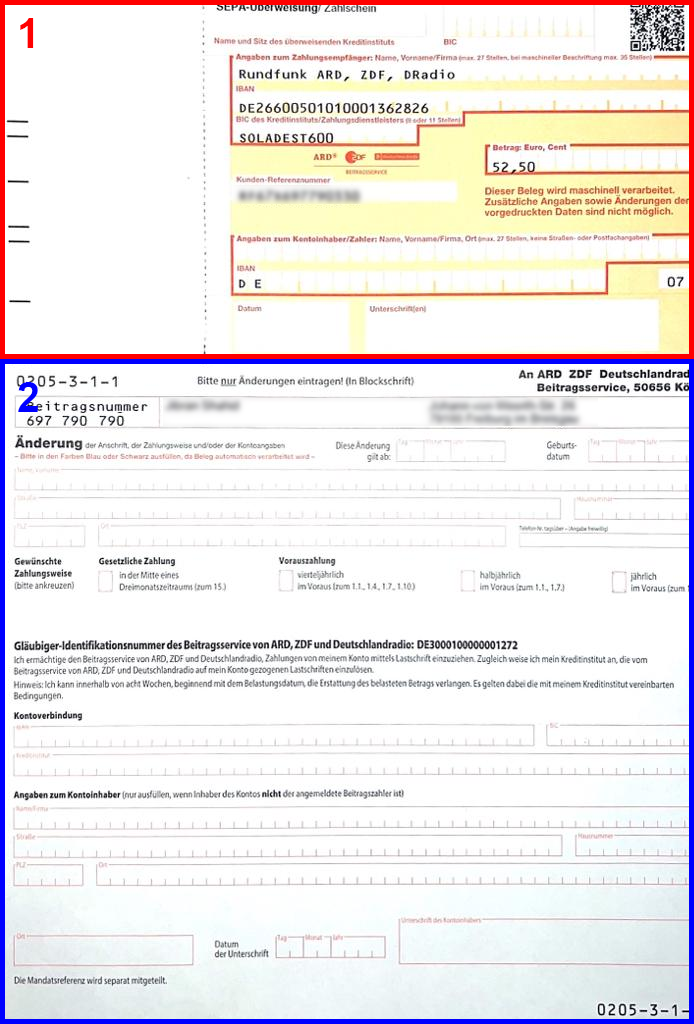 Where do I Find my Beitragnummer of Radio Tax in Germany?

When you do your city registration in Germany. After that, you get a number of letters from different departments. Like Tax ID, Social Security number, and then you also get your first Radio Tax Letter in Germany. 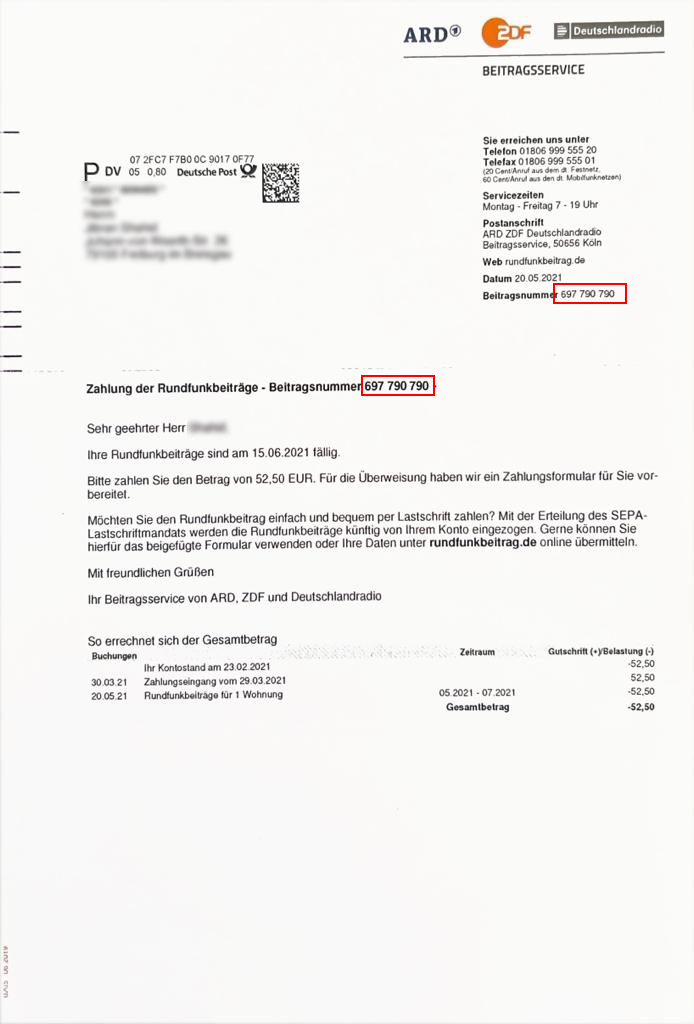 Who is Exempt from Paying the radio tax in Germany?

There are some ways to avoid it legally.

Do Deaf and Blind People exempt from Radio Tax in Germany?

The broadcasting charge does not apply to people who are deaf-blind or receive assistance for the blind. Residents of nursing homes that get inpatient care are also exempt.

If you have a severely disabled person’s ID card with the RF license plate, you only have to pay a reduced contribution. This includes people who cannot attend public events due to their disability, as well as the visually impaired and the hearing impaired.

As of 2013, People with a severe disability needs to pay approx. 6 euros per month but deaf-blind people are still exempt from this radio fee.  if you want to exempt yourself due to these disabilities then you can find the complete process: Here

How much GEZ Cost for Secondary Residence?

If you have a second residence (Nebenwohnsitz), then you will only have to pay for the first residence.  You may submit this form to request an exemption for your second home.

Students can spend a lot of time watching television or listening to the radio, but they aren’t exactly wealthy. Because of this, most people studying in Germany or completing apprenticeships do have to pay the license fee unless they qualify for student financial assistance from the German government (known as BAföG), and do not live with their parents.

If you do not get state funding (BäFog), you will be responsible for paying the licence fee. This may be a little painful because students reside in single-room student accommodation. In this case, they have to pay the entire fee on their own.

When will You Get the ARD ZDF Letter?

If you move to Germany and register, your information will be forwarded to the Beitragservice, who will contact you within a few days or weeks to notify you of your contribution obligations.

What happens if the Radio Tax in Germany is not paid?

If you chose not to pay for the Radio Tax (Rundunkbeitrag) in Germany then soon you will get a payment reminder with the late fee. Depending on the amount it is around 1% of the Radio Tax bill, but if 1% is less than 8 euros then fix 8 euros is charged as late fee. (§ 9 Paragraph 2 Sentence 1 No. 5 RBStV in conjunction with. § 11 of the state broadcasting corporations’ statutes.

You will not receive any second reminder after that. They will keep on adding these fines till this matter becomes an official matter. After that, the official debt collector service is involved.

After that, the German government will track you down and charge a hefty amount of money to your account. You’ll be hit with the outstanding sum plus penalties for not paying this amount.

The Beitragsservice will also notify the SCHUFA, which maintains your credit score in Germany, of your poor payment record, affecting your SCHUFA score and any future purchases you

How to Cancel the Radio Tax in Germany?

If you’re leaving Germany indefinitely, don’t forget to deregister yourself as well! Simply go online and submit a form to cancel the radio tax in Germany. The government will stop taking money from you after you fill out this form. This way, they know that you no longer want to be subjected to the radio tax.

If you don’t do deregistering, you will keep getting charged for the fixed payment and that can cause serious trouble. in future

As Germans need everything in Black and White, that’s why you can’t unregister your radio tax in Germany yourself via phone, you are required to submit an online  form for De-registration. Another way would be to go to GEZ office in your city and get it done in person.

Although there may seem like many different types of taxes to pay in Europe. The radio tax in Germany is an essential one that should not be overlooked. It could become really expensive if you fail to pay this radio fee.

⚠️ In our articles, we use affiliate links from our affiliate partners. If you click these links and purchase a service or a product then we may earn a small commission, without any extra cost to you. This way, we stay motivated and bring you all you need to know about Germany.

We publish TIPS and GUIDES particularly tailored for EXPATs living in Germany, so you can Live Like a Local in Germany.

Do you want to know more about it, then subscribe below and get up-to-date information about life as a LOCAL in Germany?

Do not worry, we will not SPAM you. You can unsubscribe whenever you want.

Manage Cookie Consent
To provide the best experiences, we use technologies like cookies to store and/or access device information. Consenting to these technologies will allow us to process data such as browsing behavior or unique IDs on this site. Not consenting or withdrawing consent, may adversely affect certain features and functions.

Do you like to know more about it then subscribe below and get up-to-date information about life in Germany?

Do not worry, we will not SPAM you. You can unsubscribe whenever you want.

If you don't find the Email, then kindly check your SPAM mail. Thank you